Kids Orthodontics | Orthopaedics Gold Coast
Click here for Information on COVID-19 for your health and safety at the Practice.

Orthodontics for young children is called orthopaedics and may involve simply maintaining space for erupting adult teeth through to the use of functional or growth appliances.

These may be expansion appliances, removable plates or partial braces. Children are very responsive to treatment at this age as their bones are still developing and as such are easier to guide into the correct alignment.

Children who have orthopaedics treatment may still need braces, retainers or other appliances later, but pre-treatment can often reduce treatment time and the severity of problems. This can help avoid the need to remove healthy adult teeth in the future due to excessive crowding.

When a person’s tongue is not functioning in the correct position inside the mouth, it can have far reaching implications for the shape of the person’s upper jaw and craniofacial development. This factor needs to be weighed in the decision making process when considering orthodontic treatment.

An 8-year-old boy was told (by a dentist from another practice) that he needed to extract two teeth from his upper jaw before he could have the rest of his teeth straightened. Uncomfortable with the advice, the child’s parent brought him to see one of our dentists for a second opinion. 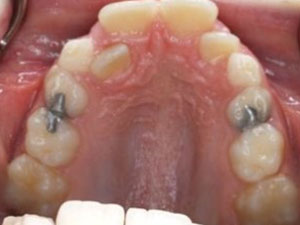 Our initial examination revealed that both the boy’s upper and lower jaws were underdeveloped (see pictures above). The jaws were basically too narrow and did not have sufficient room to accommodate all his teeth. Upon careful evaluation, we traced the problem of the underdeveloped jaws to a mouth breathing issue.

The muscle force of the tongue can shape your jaw

As the strongest muscle in the body (based on weight parity), the tongue’s muscle force is, over time, able to expand the upper jaw to accommodate all your adult teeth. This is provided that your tongue is usually found in its optimum position, tucked in the anterior part of your upper jaw. Since a mouth breather tends to drop his tongue when breathing through the mouth, the tongue is less likely to be found in the optimum position.

In the case of this young patient, we found that the resultant lack of tongue pressure in the roof of the mouth had impeded the natural growth of his upper jaw. To solve the problem, we placed a fixed appliance to expand the upper jaw prior to the orthodontic treatment (see picture below on the left). The fixed appliance reshaped the arch and expanded the jaw to better accommodate all teeth. This also has a positive post-braces effect, as the aesthetically pleasing and uniform arch of the teeth attests. In conclusion, not only was it unnecessary to remove the teeth to create additional space, the extraction would have caused the already small jaw to constrict further.

The pictures below show the teeth arches following the removal of the braces. This package includes 1 clinical exam, 2 intra-oral radiographs and an oral cancer screening for at risk patients.

Your Professional Clean includes 1 x scale and clean with a hygienist. Book an appointment with Robina Town Dental today.

We’d love to hear how your experience was at Robina Town Dental and any feedback to help improve your experience. This survey is completely confidential.

Robina Town Dental is now part of the Bupa Members First Platinum network. This means we can offer even more benefits to our Bupa members.